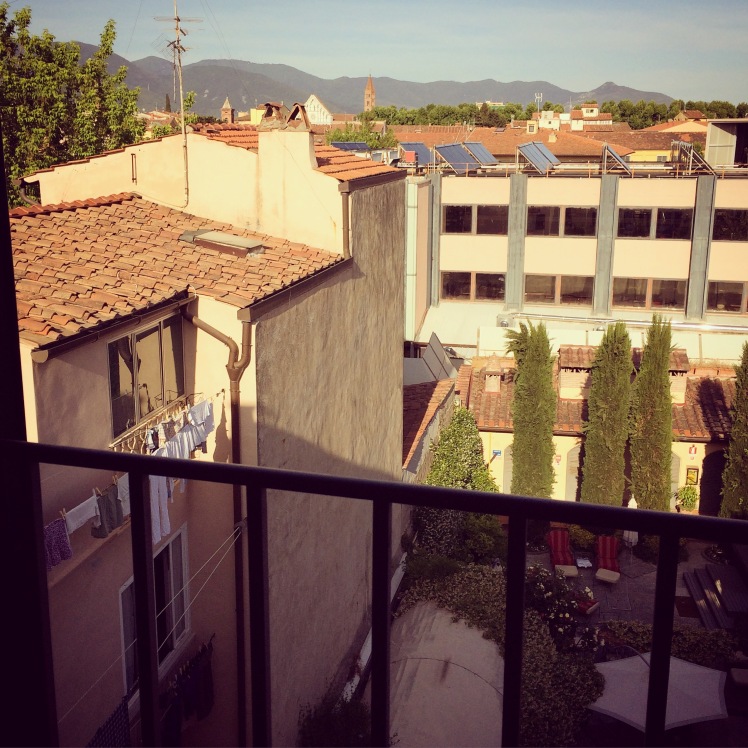 We began our journey in the sky lounge of Miami International Airport. We are flying first class – which was a nice surprise to me. As we sipped our wine we wondered aloud about all the amazing and beautiful sites awaiting, us then turned our attention toward solving the problems of the world. Our own individual worlds.
Finally our flight is called and we head to the gate. We take our ample seats that recline to flat- yes please – and await instructions. In case of an emergency exit we are advised to leave our hand luggage on board and remove our higher heels. This will be unnecessary.

Our evening meal was served in 4 courses. We both fell asleep after 2. We slept well over night and awakened to the glorious scent of espresso. We were almost to Rome.

After being rushed through customs we found our way to our terminal for our connecting flight. The line for security was a mile long. We people watched. As we got closer, it was easy to spot the unfamiliar travelers, many of them seem to be Americans. Unsure if they should take their shoes off or laptops out of their bags. Completely flustered and lacking all grace they spilled purses, dropped their passports and completely misunderstood all instructions.

I have been there to be sure. If international travel has taught me anything it is to be observant, patient and confident.

My bag was pulled for inspection because of my ‘electronics’. My camera stuff. To investigate, the security guy took a little wipe and touched random spots in the bag and asked me to wait. I complied. Not my first security dance. He placed the swab into a slot on his computer and waited for information. As soon as it beeped, he waved it over his head, looked in my general direction and said ‘bye!’ We were through.

Onto our gate for our next flight, to Pisa.

As in America, gates change and ours had as far as we could tell. To double-check I approached the new gate. The woman behind the counter was busy doing something that prevented her from looking up. An Italian man came by and asked her a question to which she replied ‘Si’. Then a French man to which she replied ‘Oui’. Then finally when she turned to me she simply said, ‘Yeah’. Then directed me back to the original gate on my ticket which was ultimately wrong so we headed back to the new gate.

We boarded late, which put us behind and we lost our place in the take off order so we sat on the tarmac in an imaginary line for over an hour.

The man next to me checked his watch no less than twice per minute as if he had perhaps nodded off and maybe we were actually landing rather than waiting to take off. I presume him to be another American. He possesses a professional level of impatience I am all too familiar with, yet we have not spoken.

Once airborne, our flight is short and thankfully uneventful.

Unlike our cab ride to the hotel.

Our taxi driver, out to impress the Americans with his Italian driving skills, sped through the narrow one way streets of Pisa, dodging pedestrians, bicycles and other cars. He suddenly spun to a stop in the middle of a square surrounded by big old buildings. Was this our hotel?

He looked back at us and dismissively cast his hand in the direction of one of the buildings. We looked at it. Karin took a photo – because that was clearly what we were supposed to do – then we asked him what it was.

After a series of animated hand gestures, including one great flourish where he pointed to his head with both hands then up, we surmised it was some sort of school. A university it turns out. Then we were back on our way.

Not more than a block from the university was our hotel. It is charming from the outside, tucked in between a restaurant and some apartments. On the inside it is a beautiful restoration of a fourteenth century tower house. Our room, deeply gabled toward the window, has an exposed wattle and daub ceiling, tiny flowers painted on the walls near the top and an archway leading from the small hallway into the room itself. The hand painted number above our door says 310.

It feels as if we are looking out of the dormer of an attic space. The window is shuttered with wooden doors that open inward. The window also opens in exposing a simple metal railing between us and the three stories below. In view are the beautiful gardens full of jasmine, cafe tables with large umbrellas, a hot tub with a fresco painted behind it (of course) and fresh laundry hanging next door.

In the apartments next to us, an Italian man in a tank top and dark rimmed glasses smokes a cigarette with one hand while holding an ashtray in the other as he surveys the gardens below.

It’s a scene from a movie. It is all we had hoped for and more.

One thought on “The Italian Affair”